Child Brides are a Global Crisis. Child Brides are mainly heard of around the areas of India, Afghanistan and Nepal, although it has been happening in all four corners of the globe. Child brides are mostly wedded in developing countries Niger, Chad, Mali, Bangladesh, Nepal, Ethiopia, Sierra Leone, India, Uganda, Zambia, Nigeria, Congo, Liberia, Tanzania, Kenya, Ghana, Pakistan, Rwanda, Sri Lanka, Namibia and South Africa, but it even occurs the developed countries of Australia and America.

The problem in most of these countries is that they don't use contraception and as a product of that the child becomes pregnant.. Usually the female is too young to have gone through all the stages of her life that help her with the assistance needed for having a baby. This can lead to:

Sometimes the baby is born, although under the economic situation and the poverty the mother was probably already in, the baby can not survive for long because of lack of nutrition, low birth weight or premature birth. According to UNICEF, women giving birth between the ages of 15-19 worldwide has accounted for 70 000 deaths each year, they also state that women under the age of 18 giving birth has a 60% greater risk of their infant dying than those over the age of 19. In Yemen, every 100 000 births; 365 women and 41 babies die from the effects of child marriages.

Many of these marriages can result abuse either sexually or physically. Almost all of these brides have been brought up in an environment where they were submitted and exposed to some sort of physical abuse, in which either their mothers, sisters or friends being hurt by men. To them it is normal to be in an abusive home.

These women are beaten along with their children but because of lack of education and growing up in an abusive environment, they can not tell if it is both morally wrong and illegal. Moreover, if they are educated on the law, threats from their spouses may prevent them from reporting abusive behaviour.

The Effects of Child Marriage: Loss of Life 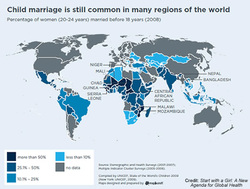 When the Bride joins in marital union she leaves behind the life she once had, her friends and education are now secondary to her marital commitments. Childhood is defined as the state of being a child, a child is the youth that will determine our future and be the eventual beginning of new life. They are inexperienced and immature, let alone can they have a child of their own. Child Brides should finish their own childhood before they start a new one.

The United Nations Fund for Population Activities (UNFPA) stated this is one of their letters on the subject, Child marriage brings high cost in lost development opportunities, limited life options and poor health.